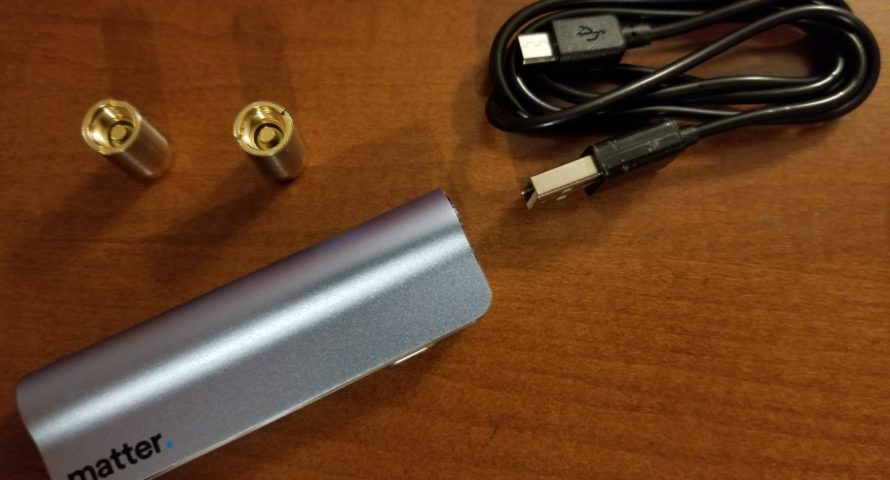 Vapes are hot news right now. They are everywhere. They’re either the worst thing to happen to humanity, a menace, turning our kids lungs to mush. Or they’re a less toxic tool for smokers to get their nicotine fix without as many other possible potential chemicals mixed in. That said, here is a review of the Matter Vape from the Verilife medical marijuana dispensaries in New York State.

Also read: Money20/20 USA to Focus on Banking and Finance in the Cannabis Industry

But First… A Few Words About Vapes

Before I go any further we at Cannabis Sentinel want to be clear. We are not condoning, promoting or saying vaping of any sort is safe. In fact I really had a hard time as not only a journalist and as Editor in Chief of Cannabis Sentinel and other news sites with doing a vape review, personally with so little knowledge from the FDA and scientific experts on what the side effects of vaping are. I went through with this review though because it was a positive experience and a step up from what was previously available — to the point I felt it was beneficial to share with others who may find the information useful.

Here’s a further disclaimer: the Food and Drug Administration and scientists do NOT know the effects vaping has on lungs yet. (most likely vitamin e additives current reports linked are saying) This goes especially for younger people’s still-developing lungs and long-term for everyone. So please be aware of the risks of vaping and keep your eyes open, as new information could come out at any point to make you need to stop immediately, or know to change in some manner. (We will have lots of reviews as we go but properly understanding risks while we go is just as important.) The CDC is reporting that they found vitamin e acetate in most of the cases of lung damage from vaping. So far the carts have looked to be from black-market carts that used it as thickening agent. CNN has a good report on the CDC’s recent findings.

Thank you for reading the wall of text. Now on to why I felt I should still review it anyway. 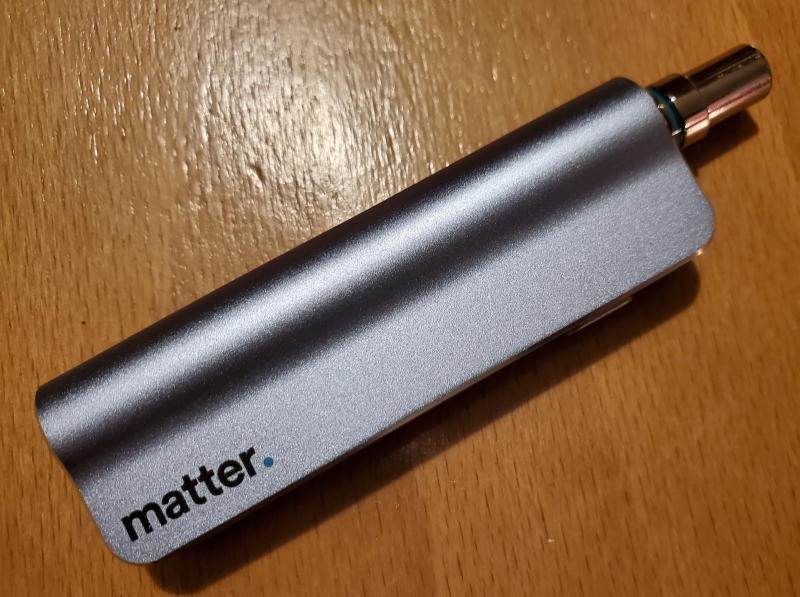 When I started in the medical marijuana program in New York I was not sure what to expect. I’d not been a cannabis user previously, though I’ve never been anti-cannabis. My career and other factors would’ve made difficult in the past. So I went in mainly blind. I have been writing a series of articles to share my experiences, and I’ll go further into this in the near future.

Needless to say I don’t smoke, and never have. After a year plus in the MMJ program I found through discussions with a close friend I should try the sativa at Verilife to help with my pain and nausea. Previously I had been taking plain THC/CBD and THC or CBD in tinctures, caplets occasionally vaped.

I hate vaping as much as smoking. LOL. But I tried it, and…

It burned my throat, my lungs felt crappy and my voice at times would get worse if I had used it very much. It was the basic pen vape that initially was all you could get at the pharmacy. No settings, just on and off. Never having been a smoker this was a mess for me. I never got the same dose twice with this thing. One time it would put out a huge gag-inducing cloud, another nothing. One time, trying to get a dose took three or four puffs to get the same effect of one or two.

I don’t take it in high doses as it is. So getting a surprise high dose wasn’t a nice surprise when I’m standing in a garage at 3:00AM, at 14 degrees, hurting so bad I couldn’t sleep and suddenly my already bad balance was worse. Why go to take some CBD and have the vape scorch it? 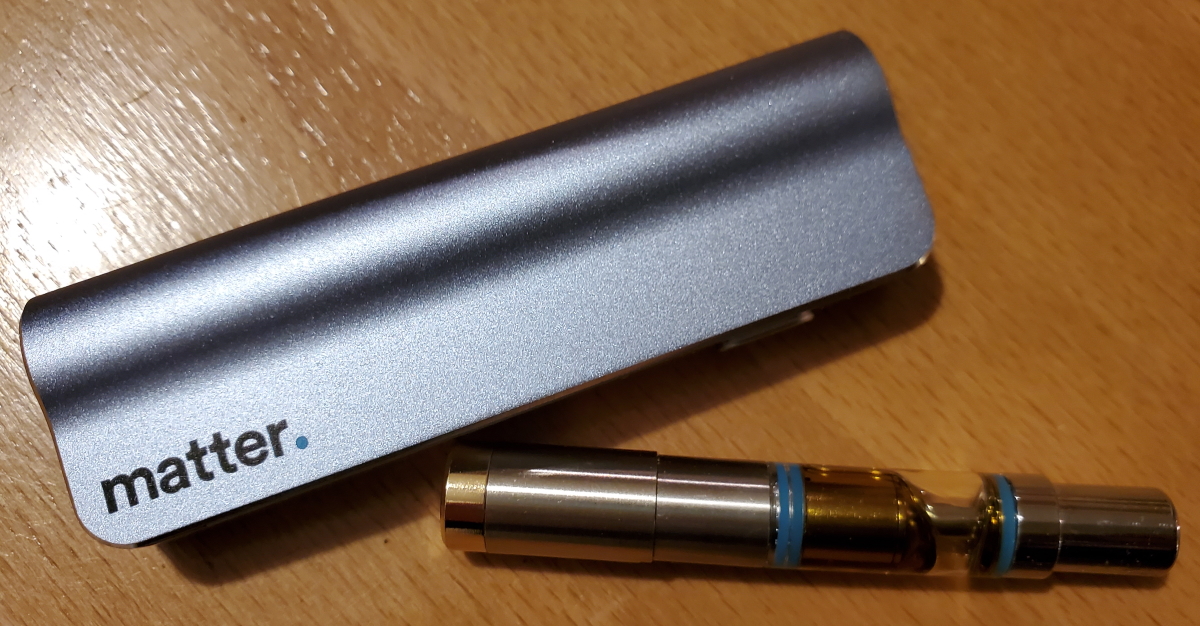 Getting the Dosage Right

This is what spurred me to write this review. When the Matter vape suddenly showed up at the Verilife pharmacy a few months ago, I got one. I knew I could get an O-pen or other vapes after looking and asking around, but I had only tried it with the CBD carts which worked well. Yet it still seemed too much on the lower setting. It burned my chest on the lowest settings. I don’t use them enough to build up that tolerance I find others in my situation have.

The Matter vape has four settings, which immediately was a step up from the basic pen. (Blue = 2.3v, Green = 3v, Yellow = 3.6, Red = 4.2) Like the O-pen Vape it’s simple to use yet works better in this case. Here’s where it immediately stood out:

Consistency of temperatures. The Matter vape comes with two induction attachments for your carts. You can have a couple of different carts ready to go and, instead of winding them in and out you can just drop in whichever one you like. I keep a CBD one set usually and the sativa. You screw one on and drop it in.

Like your induction stove top, when you push the button it heats up. It maintains the temp at whatever setting you use nicely. It auto stops if you go too long so it won’t overheat.

My first attempt on the lowest setting was like night and day from the basic pen and even better than the O-pen. That was with the sativa. It was two puffs and done. Each one was pretty much the same. It was noticeably superior to the generic and better than the O-pen. I was pleasantly surprised. On the green setting it is a bit more intense but again without being too much.

The next day I tried the CBD, with a cart that had been a bit scorched by the generic pen. But on the lowest setting it was a small puff of vapor and didn’t taste scorched which surprised me. Instead it tasted skunky, which I didn’t expect. But it wasn’t so hot it burned and irritated like the other two vapes. On the Green setting it puts out a nice vapor cloud without being so hot to scorch the CBD, yet not overpowering.

Over the last couple weeks I have used it exclusively and it’s maintained its consistency. I don’t get too little or too much. I only have to take one or two puffs for a dose.

To switch to a higher setting you just click three times, and the light changes through blue, green, yellow and red. Blue is the basic voltage, thus less heat. This gives a smaller vapor cloud. Due to these being sold through the pharmacy for the pharmacy, I don’t really see them elsewhere online. So I’m not sure on how they work with other products. Therefore I cannot recommend or not for anything else outside of Curaleaf carts. My carts last longer and I don’t feel like I just walked through a fire after taking my meds. The battery also lasts longer than the pen only requiring a couple times a week with moderate use. It charges with a standard Micro USB connection making it easy to hook up. No adapters to screw the pen into which inevitably fall apart.

GoFire (which we covered previously here) takes their vape a step further. This is even more advantageous than a plain vape, as it works with extracts and loose leaf. Then it keeps track of your doses with an app. We will see about reviewing one to compare them. 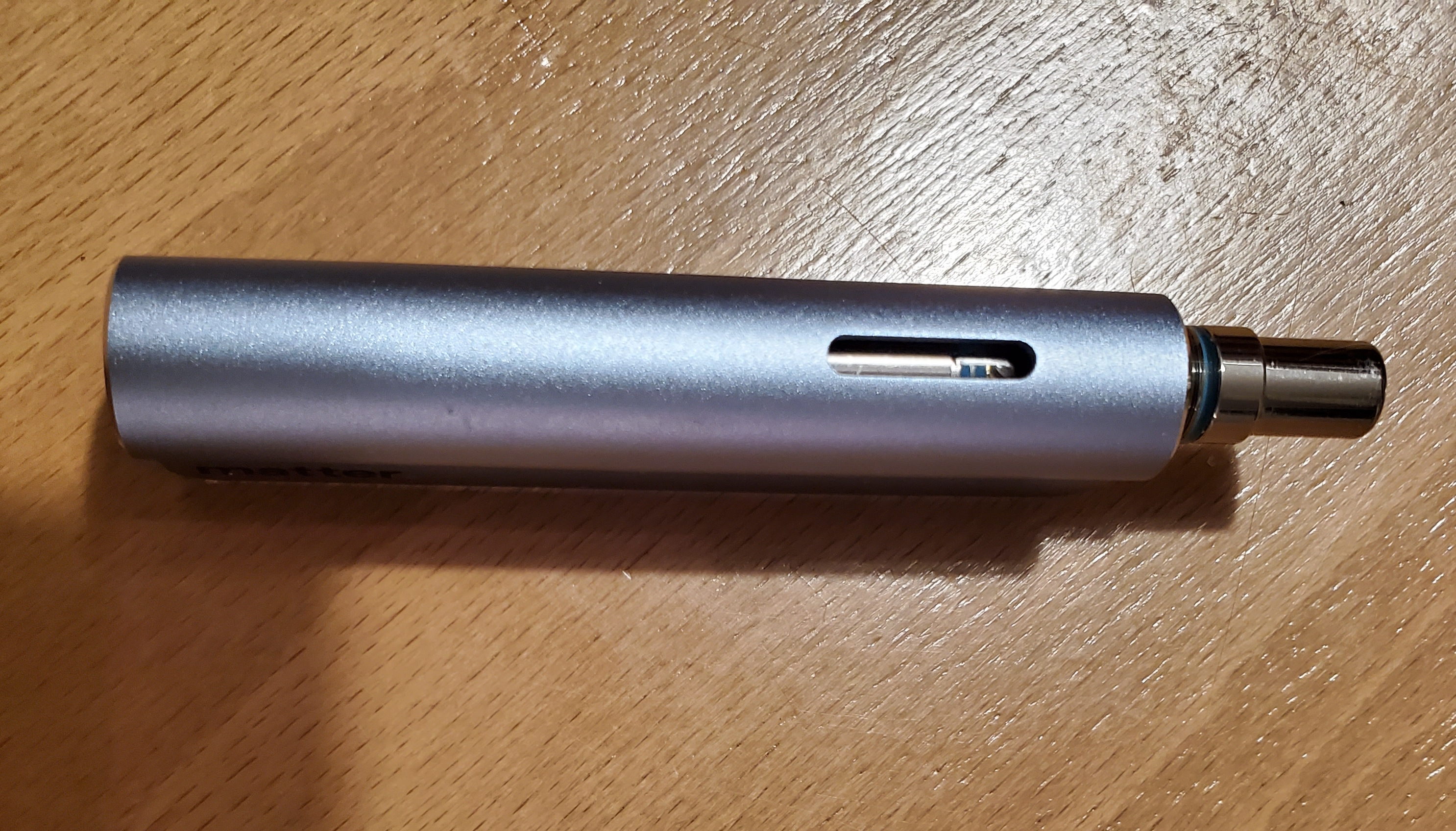 The ability to take meds with more precision is something on many minds within the cannabis industry. Helping patients get accurate, safe doses is something that is important and the Matter vape is a big improvement for me personally.

I still don’t like vaping and wish the particular type that works best for me was available in capsule, tincture or something else. But with the science still out on what damage vaping might be doing. Anything that can cut down on the amount of times I need to do it is a positive development.

Are you into vaping? What have your results been like? Feel free to share your thoughts, along with this article, on social media.